Berlin is a unique city in many ways. Around 80 percent of the city was destroyed during World War II, resulting in a blend of rebuilt and modern architecture. Modern Berlin, however, is largely the product of what came next. Berlin became a focal point in the increasingly  tense post-war competition between the U.S. and the Soviet Union,  resulting in the almost overnight construction of the Berlin Wall in 1961.

The city remained divided for decades, with many Berliners separated from friends and family living on the other side. The wall came down in 1989, and Germany became whole once again in 1990. The reconciliation of east and west was cause for widespread celebration – many Berliners had believed they would never live to see the wall come down. But reconciliation also presented challenges resulting from the decades-long disconnect of the two sides and their different evolutions.

Today, Berlin is full of construction. Everywhere you look you see it. The city has been busily rebuilding and reuniting since 1990. Throughout the city, however, segments of the Berlin Wall remain as a reminder of both hardship and triumph.

Having a lifelong interest in Cold War history, I was eager to see the wall when we arrived in Berlin. I wasn’t sure how much would be left or how prominent the remaining wall would be in the city.

Although I kept an eye out for it from the beginning, we didn’t see the wall until the second day after our arrival. The vast majority of it has been demolished, but long stretches remain in several designated areas of the city.

Sadly, I learned that a related site I was excited to visit is no longer standing: Checkpoint Charlie, a passageway through the wall and one of the most famous symbols of the Cold War where American and Soviet tanks stared each other down in 1961. The small building there today is a recreation, not the original.

Still, I got a kick out of seeing it. There’s also a great (although cluttered) museum, the Checkpoint Charlie Museum, right next door. Along with an extensive collection and documentation of the many escape attempts over the wall, you also get a great view out over the whole street.

The guard house is also stationed with two fake American soldiers. Tourists pose with the soldiers for a small fee. A little gimmicky, yes, but I’m not ashamed that I did it!

One of my favorite parts of our time in Berlin was visiting the East Side Gallery. A long stretch of the wall was painted in sections by different artists from all over the world. At almost a mile long, it’s the longest remaining part of the Berlin Wall.

The entire thing is completely out in the open, only separated by some fencing in certain areas. The first time we saw it was when we rode alongside the gallery during a bike tour. The paintings were so striking we came back the next day to walk around and look more carefully.

Musicians were playing in front of the East Side Gallery both times we visited. 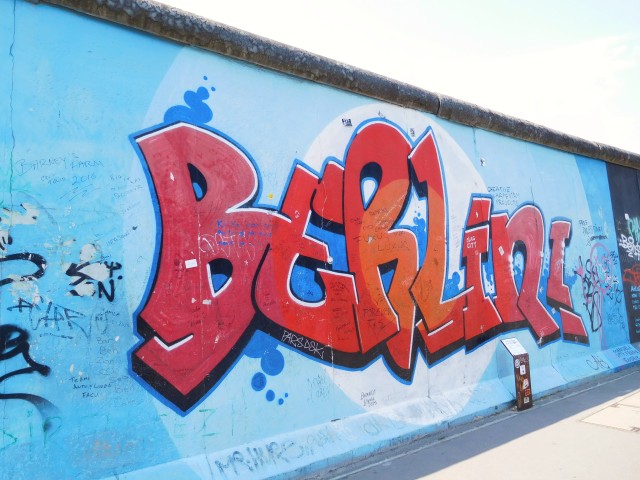 The most iconic artwork on the wall: the Kiss 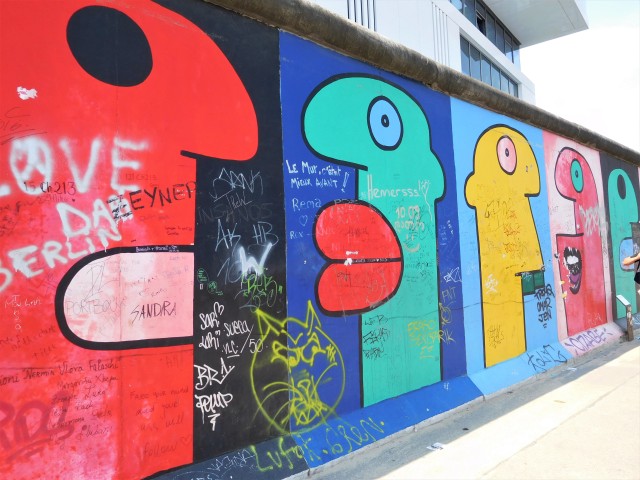 There are also some surviving watchtowers scattered around the city, as well a dedicated Berlin Wall Memorial that includes an intact stretch of inner and outer wall. The space in between was known as the “death strip.”

The various sites relating to the Berlin Wall were some of the most interesting and memorable parts of our trip to Berlin. Being able to reach out and actually touch such an important part of history is kind of mind blowing. And now I have a piece of it sitting on my desk – a tiny chunk of the wall that I bought at the Checkpoint Charlie museum.

If you’re visiting Berlin, check out my post Berlin: 10 of the best things to do

7 thoughts on “The Berlin Wall: a photo essay”

There was an error retrieving images from Instagram. An attempt will be remade in a few minutes.