When we decided to spend three weeks in Germany for our honeymoon, some people thought it was an odd choice. Most of our friends who have gotten married headed to the Caribbean or Disneyworld. The Germans we met along the way especially thought it was strange that we would come to Germany for this occasion.

Rothenburg ob der Tauber, however, could not have been a more ideal honeymoon destination was one of our favorite stops on our trip. It’s hard to imagine a more romantic or charming location.

Once an important medieval city, today the city offers a glimpse into the past as Germany’s best preserved walled-in town from that era. The little city is so incredibly picturesque, the perfect setting for a relaxed weekend in Bavaria away from the hustle and bustle of Germany’s bigger cities. The old city is encircled by stone walls, originally built in the 13th century as fortifications for a castle that is no longer standing. Two of the original gates of those walls are still intact. 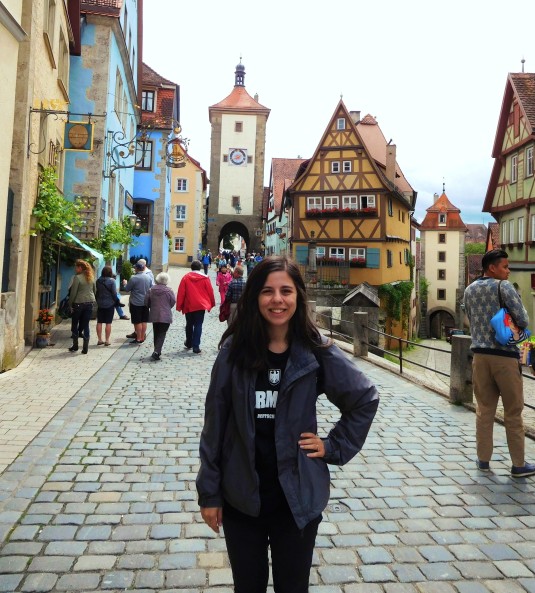 Getting to Rothenburg ob der Tauber:

We rented a car in Cologne and stayed in the Rhineland before stopping in Rothenburg. I highly recommend this route – driving in Germany is easy, safe, and affordable. You also can more easily access locations off the beaten track, as well as commute between destinations much more quickly. Our airbnb included a parking spot, and we left our car there for the entirety of our short trip.

You can also get to Rothenburg via train. It’s about 2.5 hours from Munich, an hour and a half from Nuremburg, or 3 hours from Frankfurt. There are also various bus tours that travel throughout the Romantic Road and stop in Rothenburg along the way.

Important — there’s another city in Germany called Rothenburg. Apparently tourists sometimes end up there by mistake looking for Rothenburg ob der Tauber. Make sure you have the right one!

Marketplatz is the central square of the old city. It features the beautiful town hall building (built in the 13th century and expanded in the 16th century after a fire), as well as some nice cafes and restaurants. We enjoyed sitting outside, drinking cappuccinos, and people watching at a little cafe directly across from town hall.

Incredible views of the city from town hall

For the best view in Rothenburg, climb up the 200 foot tower in the old town hall (Rathaus). The climb is a bit precarious – to get to the very top, you have to climb up a ladder and sort of push yourself out onto the observation platform. The view is well worth it, however. Especially on a clear day, you can see not only the entire city but well past it into the mountains and Bavarian countryside.

One of the highlights of our trip was walking the old city walls surrounding Rothenburg. The wall was built as fortification to protect the medieval castle, which is no longer standing. The whole thing is covered, and you get to walk through several gates and towers.

The walkable area is a little over a mile and a half. A lot of the walk surrounds residential areas, but it’s very scenic and an easy stroll, and you get some nice town views as well.

We went around 6 pm, when many of the day tourists were leaving the city. It was a great time to go – we were the only people walking for long stretches. I’ve heard that if you go midday, it can be a bit crowded.

Given the amount of tourists coming through Rothenburg, it’s not surprising they have a sizable selection of souvenir shops. I actually found them to be pretty reasonably priced for the most part. We got some good deals on t-shirts and a little backpack purse after the strap on my purse broke.

The Kathe Wohlfahrt Christmas Village shop, specializing in all things Christmas, is definitely worth a look. There have some fantastic ornaments and nutcrackers, although they are a bit pricey. There’s also a Christmas museum upstairs, but we decided to skip it.

There are also some nice local shops, especially if you venture a little further from the central square. One of my favorite souvenirs from the trip was a hand painted wooden sign that they engraved for us in just a few minutes. 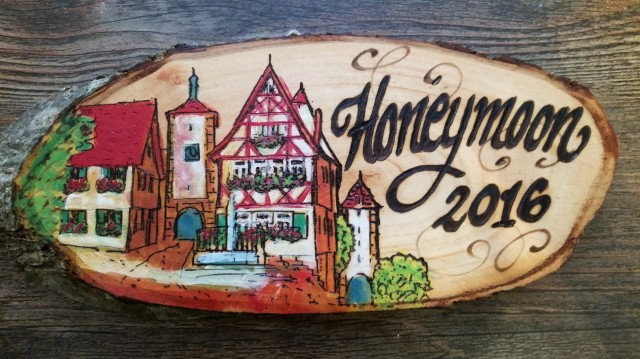 If you’re looking for something more unique to do, the Medieval Crime and Justice Museum houses an extensive collection of instruments of torture and public shaming, as well as various methods of execution from the Middle Ages – many of them incredibly gruesome. There was also an interesting exhibit on witchcraft when we visited.

The Night Watchman tour is famous in Rothenburg – and a can’t miss if you’re still in the city in the evening. The tour is held every day at 8 pm, meeting on the steps of town hall in Marketplatz, and lasts about an hour. No reservations needed, just show up on time!

Hans Georg Baumgartner leads these tours as the Night Watchman, detailing the town’s medieval history. He’s incredibly entertaining and interesting. This tour is the perfect way to end a day in Rothenburg! 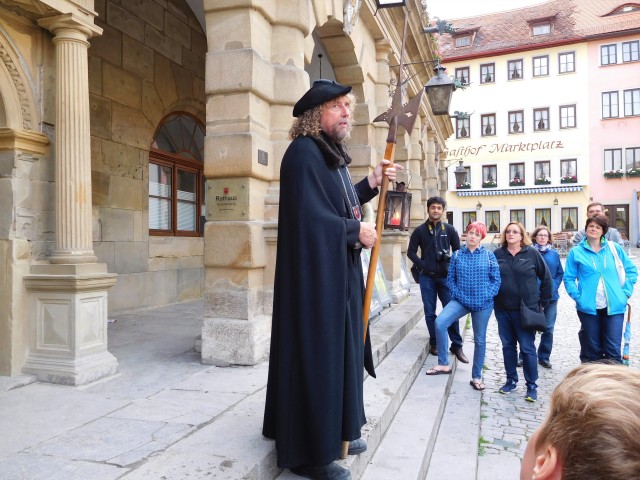 Rothenburg ob der Tauber was one of the highlights of our three weeks in Germany. It’s definitely worth the stop, and I highly recommend spending the night. Many tourists come just for the day or as a stop on the Romantic Road route, but there’s plenty to see to justify a longer visit. It’s also great in the evening when most of the tourists have departed.